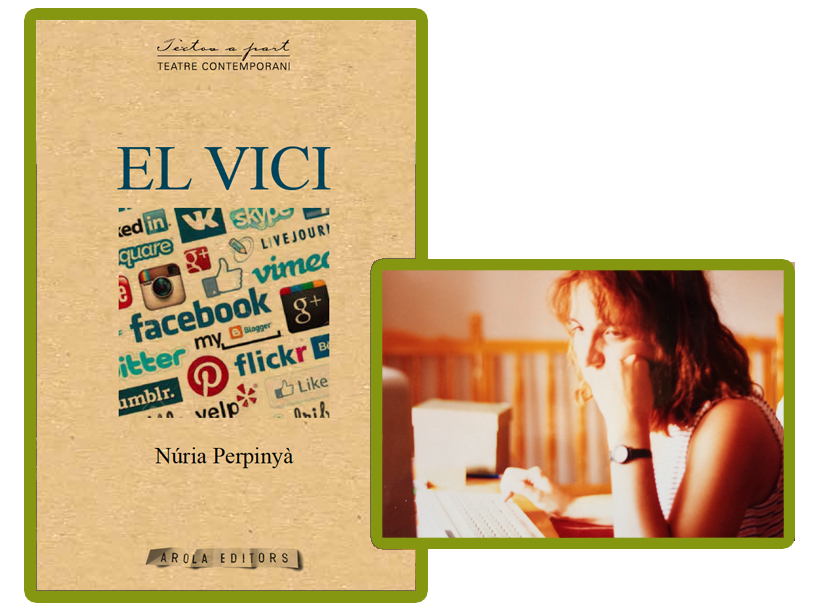 The Vice is a play about addiction to the Internet. Its setting is futuristic in a close environment . The story is developed in a psychiatric at the mountains where peculiar characters are rehabilitated: a stressed politician, a joker and compulsive gambler who does not shut up, a wonder woman, and an anorexic and existentialist girl.

We are facing a virtual and social experiment created and written online. The Vice includes thousands of tweets hanging on the net. Given the popularity of the Internet, the author considered that collective writing would be appropriate. Who knows, it is possible that this theatrical piece contains some tweet yours. We do not doubt that you have a cell phone and that you could be addicted to it…

The Vice raises an ethical debate about the advantages and disadvantages of the network. The work offers a dilemma to the viewer: the plot raises the negative of the network but, nevertheless, the scene is filled with the beauty of futuristic digital art. The other paradox occurs in the tension between the form and the subject: the message from The Vice warns us of the dangers of the Internet. But, on the other hand, the language of the piece invites us to experiment with new technologies.

The work has a meeting structure. It presents the relationships of a group of strangers with different conditions that are in a closed place for a few months. The cast of characters is: 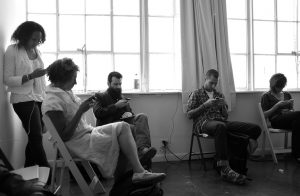 Two observers: the climber and physiotherapist Carles; and India, the friend of Elexa, the anorexic patient.

The back-ground actors can appear live or recorded: the journalists and the rest of the patients.

Carles and PifarrĂŠ they can be interpreted by the same actor. The work is viable for a company of five actors.

The work is divided into two acts. It has a spiral frame with three turning points. At the end of the first act, there are two anagnorisis or identification of characters; the second act closes with others surprises linked toÂ the physiotherapist, India and the doctor.

The work concludes evoking An Enemy of the PeopleÂ by Ibsen. We can remark also that this sentence of the Perpinya’s play that contains the concept of Artaud’s cruel theatre: “Networks are a plague that is entrusted and imprisoned us in a cruel theater where the grotesque guts of our unconscious surge.”

In the Internet, there is no temporary dimension and everything is in an everlasting present that is updated. Likewise, Perpinya’s novel it is also played with several temporary moments that, combined, contravene the earthly laws of Physics creating unexpected paradoxes.

This work wants to show that art can be made with new communication technologies. A different, online, random and collective art. And, suddenly, the Paradise is a literary architecture built thanks to thousands of Twitter users who have unconsciously collaborated in this creative experiment on social networks between the years 2013 and 2017. The literary work is made up of a collage of Tweets of thousands of people from different languages ââthat PerpinyĂ  was organizing online. Here you can check the folders of her organizational work in Storify. Consequently, in its first phase, the writing process of this maze combination of sentences has been social and virtual. Although all that is published on Twitter is shared and is not subject to copyright (unless otherwise stated), the author wanted to record in this link the origin of the tweets that she incorporated and modify to adapt to their dialogues. It’s an aphoristic novel of 4.000 voices.Â PerpinyĂ  is an avant-garde specialist as we can see in her recent book: The Broken Chair. Catalan Avant-garde Theater. 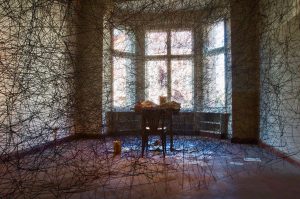 Since the Internet is a global common ground, Perpinya considers that, in order to express its planetary world, it would be very appropriate for it a collective writing. The resonances of so many voices of Internet users in the novel of paradise evoke the anonymous poems that are intertwined with the Odyssey, a work to which PerpinyĂ  has dedicated one of herÂ essays.Â TheÂ  playwright PerpinyĂ  finishes her declaration of intentions with these words: “I do not want the spectators to go back to Ithaca but leave it, leave their home, mobiles and computers, go to the theater and start their adventures in the open sea.”

The sentences that are uploaded to the network remain floating and they are alive like the first day. NĂşria PerpinyĂ  has opened the windows in order that the clouds of words that fly over us could come in.

The experiment is completed by offering to the readers a double version of the story. The play The ViceÂ and the novel And, suddenly, the Paradise. Two brotherly books that tell the same story differently. The theatrical version has a more incisive and aphoristic language, while the novel is more detailed and psychological.

The action is divided into three spaces: A virtual world of science fiction, the rehabilitation clinic in the mountain and the psyche of each one of the addicts.

The virtual scenario has a cybernetic aspect. The images of Art Futura, the Dromos by Maotik or the inflatable spaces by TomĂĄs Saraceno suit to it.

The mountainous landscape can be a romantic stamp or, better, to have an air of the artist Perejaume. It must include a psychiatric.

The inner world, always hardly representable, appears in the second act and is a fusion between virtuality, anguish and madhouse.

In some loving scene, poetic dances are proposed.

The goal would be to transmit the virtuality to the public. The stage could be fill up with plastics and flooded with glycol generators with a fair density in order not to disturb the vision. It would also be advisable to create lighting effects in the stalls to involve the public in the drama and to increase their identification with the characters.

The costumes of the characters vary depending on the spaces. When they are online they are dressed in zorbings or transparentÂ  bubbles. To avoid the comedy, it is preferable built the SF outer space in the aesthetic line of Mariaelena RoquĂŠ, Montse AmenĂłs or Plensa & Fura dels Baus. 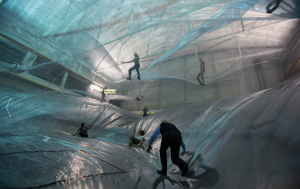 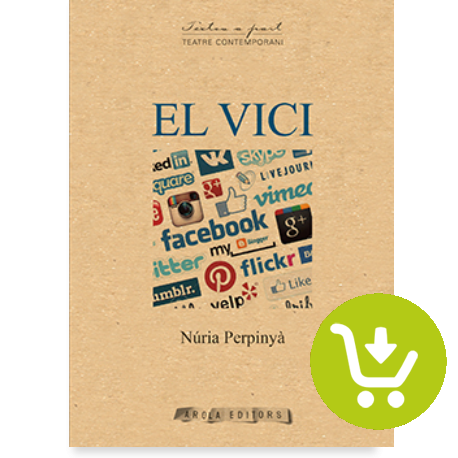 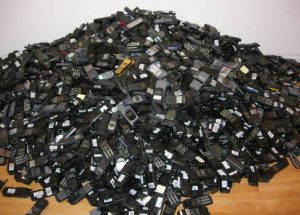