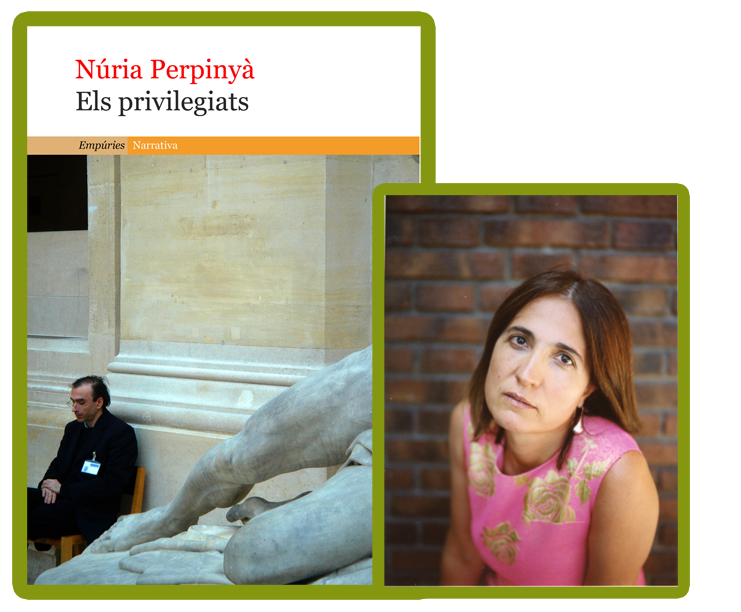 The Privileged, a dramatic novel set in a museum, reflects on the art and the massive growth of cultural tourism. The protagonists are the guards of a local museum that is being transformed into a museum of contemporary art. The novel adopts a point of view of secondary characters and reflects on the contrast between the importance of beauty and the indifference of the people who look after it.

The Privileged is a comic novel about managers and workers, a cut and thrust among coworkers, injustice and power struggles.

The title points out the rested work of the guards who apparently live like kings and how lucky they are to work surrounded by pieces of art. The town’s name, TelamĂłs, comes from the Latin” telamone” a pillar in the shape of a human figure, like a caryatid. 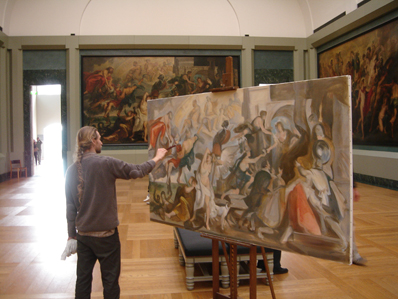 After anxious Mistana, PerpinyĂ  decides to write from greater distances. The humorous tone of The Privileged is committed to a more social and active sight.
The idea was born in 2001, at the Gulbenkian museum in Lisbon. The first draft was about a guard who used to listen to the public opinions; but soon after, instead of a passive guard, the guards with their own views were imposed. From 2001 to 2003, PerpinyĂ  studies museology, art history, regularly visits museums and galleries and goes into the labor problems of subordinates, a world that was completely unknown to her. In 2004, a humble defender of the order, Pere SerivĂ , a character inspired by the author’s father, is imposed as a protagonist. The book is organized in a binary manner: the first part is set in the old museum, the second part, in the new one. In 2005, the plot conclusively revolves around SerivĂ  as an unjustly treated victim. The motive of blaming an innocent puts SerivĂ  in the brotherhood with Silas Marner, Marguerite Gautier and William Tell, among many others. 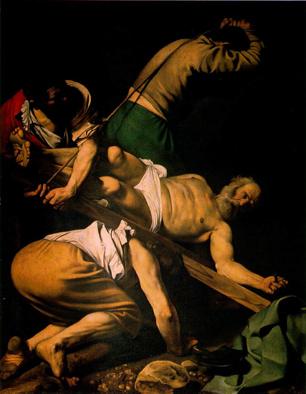 An ironic and dramatic novel with an invisible author

The work blends a traditional novel with a dramatic one and admits two genre readings: as a novel or as a theatre play, without a narrator’s voice. The narrative parts provide additional explanations to the dialogues, as well as they work as the invisible stage directions of a performance, though longer and reflexive.

Historically, the novel genre is the daughter of the theatre (and epic poems) and is born in the seventeenth and eighteenth century. The Privileged makes the same path in reverse. It is a tribute of a modern novelist to the theatre and to the peace and modesty of small museums.

In a novel it is tended to identify the author with the narrator or any of its characters. In theatre, the author remains behind the curtains. This is what happens in The Privileged. The point of view of the author does not coincide with the narratorâ€™s one; much more traditional and classist, easily assimilated to the director of Quinci Climent. It is also very different from the views of the guards who look at the paintings with contempt; neither can be assimilated to the eccentric director nor to the artists. However, as PerpinyĂ  deeply admires the art, she participates in some of the refined narrator’s views of the director Esmirna Trevi and of some experimental artists, and, even in some of the comments of the guards; therefore, when exposed ironically, they should be understood as a self-irony.

We would misunderstand the intent of the author if we interpreted the book as a postulate against vanguard and museums. Nothing further from the truth. However, the guards and visitants are free to think and to make mistakes as much as they want. Not in vain, it is a black humor work addressed to the lovers of art and of the “dolce fare niente”. 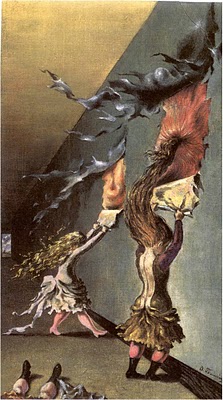 Perspectivism: each guard is different

The Romans used to say, he who sees everything identical, does not know anything (“nihil novit quien aeque omnia”). Laymen see all the forests green, while for botanists every green spot is made â€‹â€‹up of dozens of different species. Similarly, each guard is different from another although they wear the same uniform. Each angle of view, each attitude varies. The perspectivism goes beyond the eminent hero that obscures the secondary characters and beyond the single framework that throws its drafts to the garbage in order to look more original. In perspective thinking we do not find egotistical grandstanding but many collective histories that vary depending on every nuance. In the colour palette, all the reds, the yellows, the greens and the blues are equally important. The psychological spectrum of The Privileged is varied, such as the series of Bacon, Warhol or Sol Lewitt. 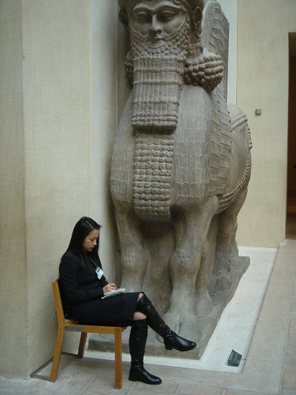 Where are the artists?

The artists, the true protagonists of art, are absent from the book. The author wants the readers to note this void and be offended: so many people around the art (directors, curators, dealers, public, guards) and the most important, the creators, represent the background. Something similar happens to the publishing industry, much stronger than a poor writer, or to the food industry that takes advantage of the farmer. The absence of artists in a book about art is significant. However, the paintings themselves appear in the book and in large numbers. All this aims to mean that the ego of an artist weighs less (and rightly so) that his work.

The front cover photo of the book The Privileged by Manu Bausc corresponds to a sculpture by Pierre Cortot “The soldier of Marathon announcing the victory” (1822). The sculpture from Louvre expresses the antithesis between collective triumph and personal defeat, stating the tragicomic tone of the book also ambivalent. Additionally, it is an existentialist manifest: we run, we conquer our ideals and… what for? What is the art for? On the photo by Manu Bausc, the heroic death of the runner carved in white marble contrasts with the passivity of the guard; discreet and wearing a dark suit. The framing of the pubic area underscores the importance of eroticism in art and opposes again to the grim attitude of the guard.

The art is a world apart that has nothing to do with the evil and ridiculous disputes of the politicians, neither with mortgages, nor with the TV news. Some people are isolated from the reality through football or chess. The paradise islands of PerpinyĂ  are: classical music, good books, love, friends and art. The top rated painters in The Privileged are: Caravaggio, Ribera, Van Gogh, Bacon, Magritte, Ingres, Manet, Rembrandt, Vermeer, Flandrin, Ramon Casas, Corot, Friedrich and Turner. Among the Catalans, stand out: Ramon Casas, Rusinol, Fortuny, BarcelĂł, Perejaume, Plensa and DalĂ­. Furthermore, in the novel we can find some irreverent deconstructionist interpretations of Picasso, Gauguin, Warhol and DalĂ­ that should not be necessarily attributed to the author.

Museums and guards in the literature 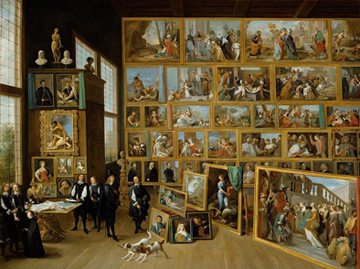 Teniers: Leopold Wilhelm the Younger in his galerie in BrusselsÂ (1650)

The character of a guard belongs to the literary archetype of a servant crossed with a sentinel at his most serious, passive and marginal version. Though belonging to the same category, a guard has nothing to do with zanni, jesters, nor with the cheeky servants. The character is also quite far from the curiosity of gatekeepers, who are the expression of a collective servant of modern times. The guards, in literature and in pieces of art, are scarce and quite secondary. The exceptions are only few and recent. An important place occupies a novel The Museum guard (1998) by Howard Norman where a guard steals a painting for love. We can also highlight as remarkable the absurd and existential situations of The Caretaker (1960) by Harold Pinter, The Doorman (1987) by Reinaldo Arenas, Tomasso (1996) by Buffalino Gesualdo, a splendid socio-political story “The guardian of the Chinese vase” (1991) by Slawomir Mrozek where a guard represents the threat for what he is watching, and, among very few others, “The guard of a recreation hall” (1991) by Garriga Vela: “I am lucky to belong to a certain elite who enjoys excessive time to meditate and this same time disrupts it.” The guards of The Privileged are the marginalized of art but, paradoxically, they are continuously physically present.

NĂşria PerpinyĂ  synthesized at a lecture “Fictitious museums” the relationship between museums and literature and established the following typology:

1. Novels about living paintings and statues

2. Novels about mystery in museums

3. Novels about fake paintings and robberies at museums

4. Literature with baroque and labyrinthine museums

6. Stories and novels about comical museums

8. Novels about love in museums

9. Metartistic novels that reflect on museums 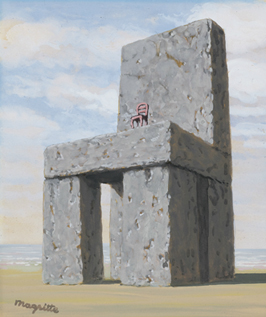 A portrait of our time: tourism, museums and security

If in A house to compose PerpinyĂ  faced the current housing problem, in this novel, she deals with the tourism and, in particular, the mediocre one that visits the museums with reluctance, following the schedule of an organized trip. The author also speaks out against American security hysteria and its police and violence derivations. To PerpinyĂ , it reminds her of apocalyptical sermons about the demon that centuries ago served to frighten people and see the sin everywhere. She believes that with less state and police control, the life would be more comfortable. In museums of Switzerland, where there are plenty of masterpieces, the supervision is practically zero. 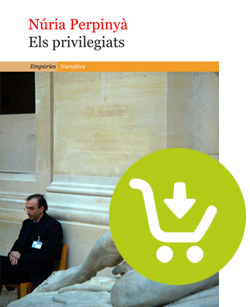